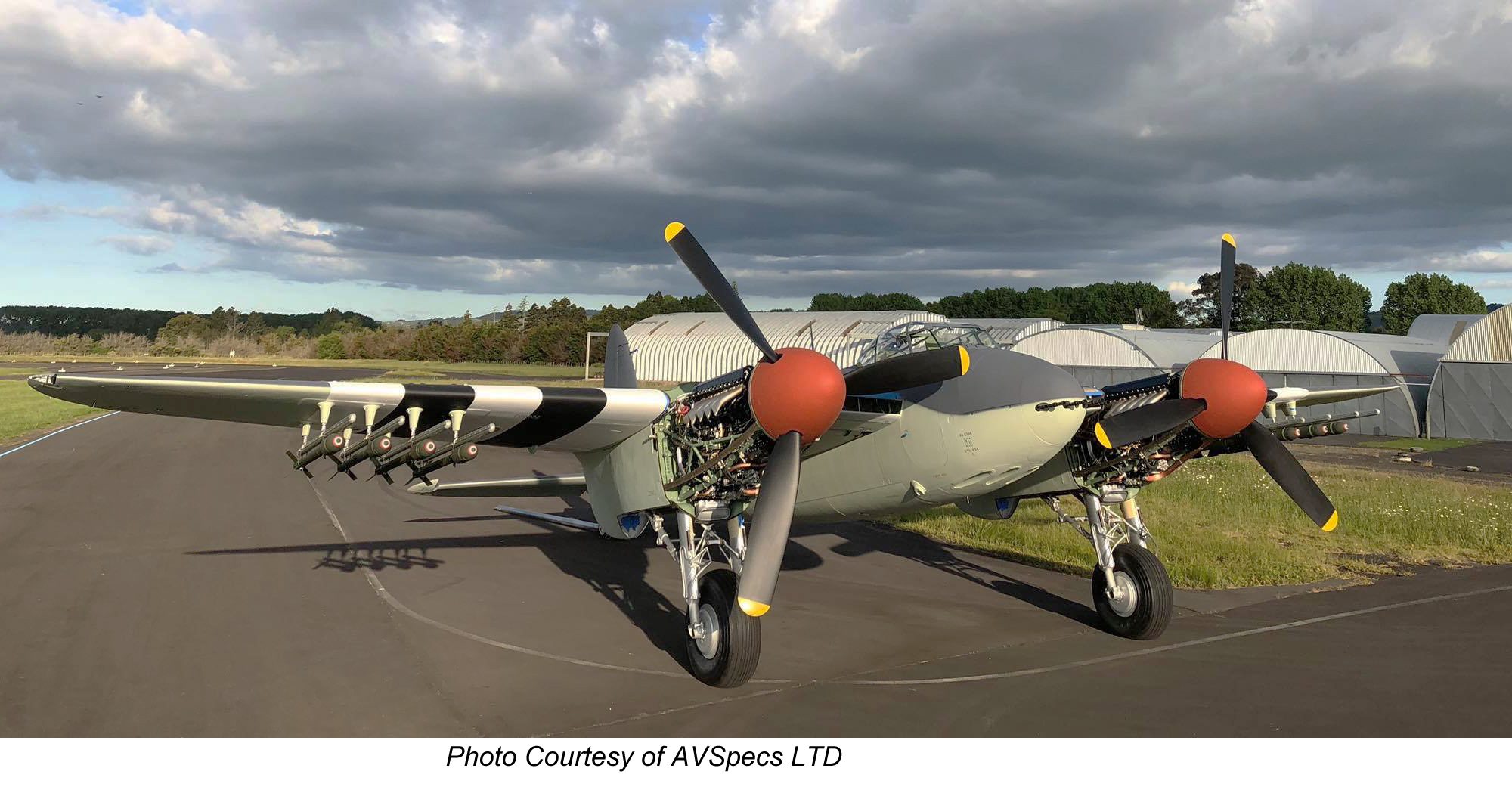 AuthentiKit is excited to formally announced the commencement of our project to add flight controls for the DH98 De Havilland FB.VI Mosquito to our growing family of freeware designs.

The Mossie is one of the most beloved aircraft of all WWII combatant planes. Designed by Sir Geoffrey de Havilland, it is made of mostly wood, making it exceedingly strong, and lightweight for its size.

Wood was chosen for several reasons. Firstly, de Havilland knew that metal would be an increasingly scarce resource as the war progressed. Secondly, there were literally thousands of craftspeople across the UK and other locations who possessed a high level of skill in working with wood who were mostly idle. These included cabinetmakers, luxury-auto coachbuilders, piano builders, carpenters, and even individuals working from their homes and garages. Thirdly, if a Mosquito should need structural repair or modification in the field, the material and implements required were mostly common lumber, plywood, screws, nails, glue and hand tools.

Additionally, when covered with thin layer of doped fabric, wood possesses a very slick, aerodynamically-cheating surface, devoid of any drag-inducing rivets or seams.

Affectionately called “The Wooden Wonder”, and “the most beautiful piece of flying furniture ever designed”, powered by 2 Merlin engines, the Mosquito was the fastest military aircraft in the world at the time of its introduction into the RAF’s livery of warplanes in 1941, even outpacing the Spitfire. It could carry a bomb load equivalent to a B-17, but in a much smaller package, and with a crew of only 2, versus the B-17’s complement of 10.

The Mosquito had no defensive armament. Its defense was its ability to outrun the threats it faced, and fly low, in what is called “the nap of the earth”. At the end of the war, the Mosquito possessed the lowest losses of any aircraft in the RAF Bomber Command service. In addition, data show it was almost 5 times more cost effective than another venerable warbird RAF bomber of WWII, the Lancaster (according to the AVIA 46/116 De Havilland Mosquito papers, 1939–1945).

The design and capabilities of the DH98 were so flexible that there were more than 30 versions developed during the war, and this number eventually exceeded 40, before the Mossie reached the end of her glorious service life.

Some of these versions include:

Being made of wood, though, also means the Mosquitos that survived the war, many of which were abandoned or left outside, suffered heavily from decay and distress over the years. As a result, into the 1990’s, there was only one flying Mosquito in the world. Unfortunately, that unit was lost in a fatal airshow crash in 1996.

Heading into the new century, efforts were undertaken to locate the best of the remnant Mosquito airframes, and spearheaded by well-financed backers, the first of these was identified and shipped to AVspecs in New Zealand for total restoration. AVspecs are an organization that has restored 3 of the 4 flyable Mosquitos in the world and we are delighted that they are consulting with us on the controls and operations of the Mossie as they can.

By far the most prevalent of the more than 7,700 Mosquitos manufactured at three main geographic locations (UK, Canada and Australia), and that which is being implemented by Eagle Dynamics in DCS (and has been offered for FSX, P3D, IL-2 and X-Plane) is the FB.VI. AuthentiKit has chosen to model our controls on the FB.VI.

Since the Mosquito is the first multi-engine aircraft to be considered by AuthentiKit, we have had to look at selecting the most critical controls, as the current version of the Universal Hub limits the number of inputs available.

The first thing we’ll discuss is the control column. Similar to the Spitfire, the Mosquito controls roll and pitch with an articulated, two-piece column. The lower portion pivots fore and aft, to control pitch. The upper segment pivots at a fulcrum located at the top of the lower segment, and controls roll. The FB models of the Mossie employ an s-shaped stick, angled from upper left to lower right, as viewed from above, overhang pointing towards the pilot, which places the upper section of the stick closer to the pilot than the lower portion. This orientation is intended to be held by the pilot’s right hand.

Since we are designing our own control stick, we may have the ability to diverge slightly from historical accuracy, and offer a left-handed version also. More to come on this.

You may see photos of the cockpit showing a control yoke. Yokes were used in the bomber versions of the Mosquito.

The following control assignments are tentative, and subject to change.

The stick and control column will obviously provide pitch and roll control.

On the stick are the following controls: wheel brake lever, .303 machine gun trigger, 20 caliber cannon button, and a bomb drop button. All these functions will be modeled by AuthentiKit.

Controlling the DH98’s engines is an Engine Control Box that contains two throttle levers, and two prop levers. These are included in our design.

There is no direct mixture control in the Mosquito. Mixture is controlled by supercharger boost setting.

Three trim controls are in the Mosquito cockpit: elevator trim wheel, located at the lower left part of the pilot’s seat; rudder control, positioned atop the right side of the instrument panel (IP) sunshade; and the aileron control, installed in the lower right section of the IP. At present, AuthentiKit will be including the elevator trim and the rudder trim.

3 hydraulic levers are located on the center right section of the IP, undercarriage (landing gear), flaps, and bombay doors. We are expecting to include the landing gear and flap controls in our initial release.

Additional controls will be included to open and close the radiator cowl flaps. This switch is also located on the top of the IP.

So, in summary, here is the current plan for Mosquito controls that will be designed and included in Version 1:

In future blog posts, we’ll go into more details on the above controls, and our progress with the development of each.

Stay tuned, and GET EXCITED!